Study objectives. The pollinator study was started in July 2012 by Dr. Jill R. Sidebottom with North Carolina State University, and continued through June 2013. It was funded in part through a grant from the North Carolina Christmas Tree Association.

The objectives of the study were to:

Farm selection. Six farms were chosen in five Christmas tree producing counties — Alleghany, Ashe, Avery, Mitchell, and Watauga based on interest by the grower and the presence of mature groundcovers. A 1/2 acre block of trees was selected at each farm. Trees at the different farms ranged from 4 to 7 feet. Some blocks were fully stocked and others had had trees harvested from them.

The Christmas tree growers were told to keep their production practices the same. That way a range of field conditions could be followed. Groundcover management varied between the different farms. Though all relied on Roundup for their primary weed control, they varied as to when applications were made and at what rate. Growers were asked to keep track of their pesticide use to determine how different factors ended up affecting pollinators.

Farms were visited every 2 to 3 weeks from July through October 2012 and April through June 2013. Each farm was visited 11 times for a total of 66 field observations.

Photographs of the six field sites. 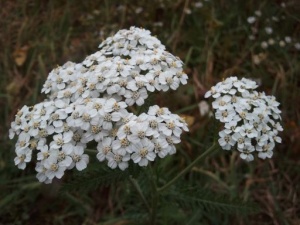 Cataloging plants in groundcovers. The first step was to determine what plants were in each field. Plant identifications were made during an initial field visit. As more plants were observed, they were added to the list. 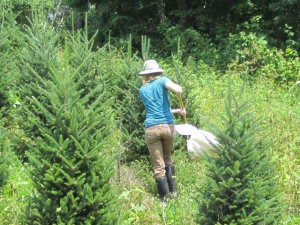 During each field visit, pollinators were observed while walking through the fields. In addition, pollinators in groundcovers were sampled with a sweep net with three separate samples collected on each observation date. In each of three samples, the net was swept through the groundcover 10 times while walking through the field or along field roads. Field borders were not included in these samples, though observations of pollinators, especially butterflies, were made here as well. The insects that were caught were emptied into a plastic bag and frozen. After several days, any pollinators or predators important to Christmas tree pests were placed in alcohol or pinned for subsequent identification.