Christmas tree pests do one of two things — they either make the tree look bad (cosmetic damage), or they kill portions of or the entire tree. Only a few pests like the balsam woolly adelgid, Phytophthora root rot, and white grubs kill trees. Most of the pests of Fraser fir cause cosmetic damage, but this is still very important to the grower. After all, no one wants a Christmas tree with yellow needles that fall off. Cosmetic damage reduces tree grade and therefore tree value. Heavily damaged trees may be able to be sold another year, but that costs the grower further production costs.

Christmas tree pests also fall into one of two categories — they are either native to western North Carolina, or they were introduced from other continents. Introduced pests are typically cause the most damage and are the hardest to control because the tree host. That’s because the tree has no natural immunity to the pest and there are few if any natural controls like predatory insects that feed on them. Introduced pests that Fraser fir growers deal with in western North Carolina include the balsam woolly adelgid, the elongate hemlock scale, and Cryptomeria scale.

Though there are other pests of Fraser fir, following are ones that most western North Carolina growers deal with: 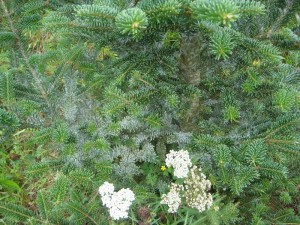 Elongate Hemlock Scale (Fiorinia externa). You wouldn’t think that a pest on hemlocks could cause such a problem on Fraser fir, but it does. The elongate hemlock scale (EHS) attacks many species of conifers, though hemlocks and true firs have the most problems with it. Native to Asia, this pest is currently found in 14 states in the eastern US including North Carolina. The scale is always on the underside of the needle and can cause needles to turn yellow and fall off. In addition, as the male scale matures, it produces a white waxy covering that ends up on the top of needles, giving them a dusty appearance illustrated in the photograph. There is also  concern that shipping trees will spread this pest to areas where it isn’t yet found. This is the most difficult pest for growers to control because of the insect’s life cycle and lack of good predators. 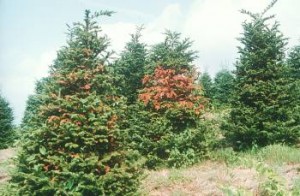 Balsam Woolly Adelgids (Adelges piceae). The balsam woolly adelgids (BWA) are tiny, soft-bodied insects that appear as white, woolly spots on the trunk and branches of Fraser fir. The BWA will kill Fraser fir if left untreated. Symptoms of a serious infestation as pictured here include dead shoots and branches, swelling around the shoot nodes (gouting), reduced shoot growth, a stiff trunk, and growth rings with red, hard wood instead of the healthy, creamy white wood (observed when trees are cut). This adelgid is native to silver fir of central Europe and moved into the southern Appalachians in the 1950’s, causing the death of many Fraser fir in the natural stands. The materials that control EHS also control BWA, and so this pest is not as important to the industry as it once was. 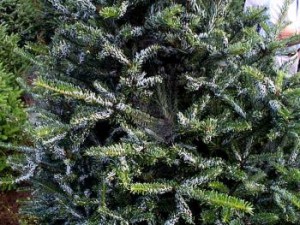 Balsam Twig Aphids (Mindarus abietinus). Balsam twig aphids are small, pale green aphids that feed on fir and spruce trees in the spring. Feeding on the new growth of Fraser fir often results in permanently curled needles as pictured here. Heavy infestations can also stunt tree growth. Trees to be harvested in the fall can be made unsaleable by heavy BTA damage. 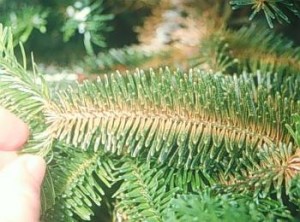 Spruce Spider Mites (Oligonychus ununguis). These red mites are tiny, soft-bodied pests that suck sap from the needles of conifers. Spider mite feeding causes yellow spots that turn most of the needle yellow as damage continues. Heavily damaged needles drop prematurely. With more growers leaving ground covers around trees, spider mites are much less of a problem as there is more habitat for mite predators. Typically they appear during long periods of dry weather. 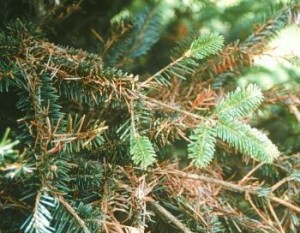 Rust Mites (Nalepella spp.). Rust mites are eriophyid mites, a group of tiny, elongated mites with four legs instead of eight, that require a hand lens or microscope to see. They feed on the needles of several conifers including white pine, Fraser fir and hemlocks. On Fraser fir, damaged needles appear bronze or rust colored and may shed prematurely. Rust mites are more common during long, warm springs and typically disappear in the summer. Trees should be scouted to determine if treatment is necessary.