Getting Direction from Scouting 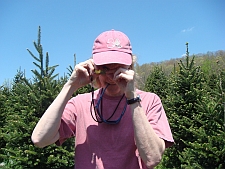 Recommendations for pest control are based on accurate field scouting. Without knowing what pests you have, it is impossible to know if, when, or with what you need to treat. Therefore, scouting drives the direction for pest control.

There is no one pesticide or combination of pesticides that will keep trees pest free. All pesticide applications have a cost — not just the cost of the material(s), but also the impact on natural predators and risks to environmental and human health. Often the best pest control is to do nothing at all, but you can safely do this only by accurately knowing what pests and predators are in your trees.

Scouting is the regular, systematic, and repeated sampling of pests in the field in order to estimate the presence of a pest and their population levels. Scouting is geared towards the major pest problems and is modified by weather that favors particular pests. In order for scouting to happen, you have to make time for it, just like you would for any other production practice. As you get more familiar with each field and learn where pest problems are found, scouting should take less and less of your time.

Part of scouting is to determine if certain pests such as elongate hemlock scale, balsam woolly adelgid or rosette buds are present at all in the field. Once you know these pests are present, scouting is needed to determine if enough trees are affected to warrant an insecticide application. For other pests which reproduce and spread more quickly such as twig aphids, Cinara aphids, spider mites and rust mites, scouting is needed to keep track of numbers so that the population doesn’t build to a level where it causes economic damage. While scouting, not only pests but natural predators are observed which should also be factored into the decision whether or not to treat. Once a pesticide has been applied, scouting is used to determine how well treatments worked.

Scouting is also important for ground cover management. Fields need to be thoroughly scouted to determine the presence of hard to control weeds, especially around field edges where such problems can get a foothold. Field observations of weed growth and regrowth are also important for timing of chemical suppression. 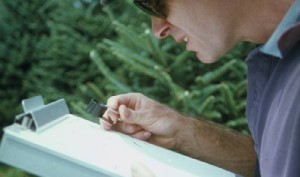 It doesn’t take a great deal of equipment to do a good job of scouting. The following tools are useful in scouting though not all are absolutely necessary:

The following is a sample scouting calendar that takes into account when pest problems are easiest to identify. This calendar should be modified depending on your location, what pests you have, and the weather. For instance, when the weather is hot and dry, spider mites in particular are more of a problem. Weed composition and height should be observed during all scouting trips.

The number of scouting trips required per year will change over time. Younger trees need scouting less as many of the pest problems are only an issue as trees near harvest. In fields with few pest problems, you may only need to visit a couple of times a year. In other fields where mites are an issue, you might need to revisit a field seven or eight times. A good scout will concentrate their scouting efforts based on prior experience with each field.

How to Look for Pests 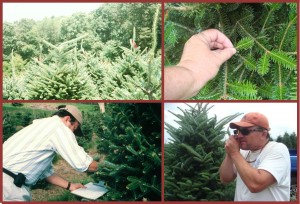 The following techniques are useful in finding pest problems.

Keeping a written, systematic record of scouting results is key to incorporating scouting and IPM into your production practices. Records can take on many forms — everything from a large calendar where observations are noted, to a small notebook where journal entries are written, to computer spreadsheets. It doesn’t matter how you keep records of scouting, just so you do.