FAQ: Health Concerns About Pesticide Use in Christmas Tree Production

Are there increased risks of getting cancer by living in areas of Christmas tree production?

Rumors have spread through western North Carolina for years that pesticides used in Christmas tree production cause cancer. One county extension agent in a mountain county even tells of a woman coming into his office and telling him a Christmas tree grower bought the property next to her, and she demanded to know what kind of cancer she was now going to die from.

In reality, cancer rates in NC mountain counties are for the most part lower than other counties in North Carolina. This has been true since the 1990s. The following tables show cancer rates by type for various Christmas tree producing counties compared to other counties in the state. These data are taken from: 2014-2018 Cancer Incidence Rates by County for Selected Sites per 100,000 Population Age-Adjusted to the 2000 US Census

Should I be concerned about pesticides in my well water? 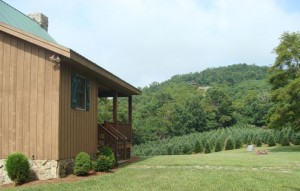 One of the herbicides used in Christmas trees and other crops in western North Carolina, Simazine, was found at high levels in a well associated with a tree farm in the 1990s. This prompted widespread well sampling in which Simazine was found in only a handful of other wells. The only other pesticides found were Atrazine, a herbicide similar to Simazine, and Lindane, an insecticide. These are all older pesticides. Lindane is no longer being manufactured and sold. Atrazine is no longer used by the industry. And once one of the mainstays of weed control in the Christmas tree industry in North Carolina, the use of Simazine (also sold as Princep) continues to decline. Grower surveys through the years indicated the Simazine was used on 72 % of the Fraser fir Christmas tree acreage in 1994 and only on 6 % of the acreage in 2013. Other pesticides are not likely to get into groundwater as they are not as water soluble.