There are several scale pests of Fraser fir in western North Carolina, elongate hemlock scale (EHS) and Cryptomeria scale being the major problems. Both are introduced pests and armored scales which make them harder to control. Because these pests are not native, their presence on cut trees may limit where they can be shipped. Pine needle scale is a native pest that is sometimes found, but has never been enough of a problem to warrant chemical controls.

Scales can cause mottling of the foliage and needle drop. With Cryptomeria scale, both symptoms are severe and develop quickly. With EHS, symptoms are much less serious. However, the white filaments produced by the male EHS can make trees unsightly during harvest. Also, EHS is harder to control with pesticides than Cryptomeria scale. It truly requires an integrated pest management approach to control. The use of pesticides alone will not give satisfactory results.

None of the following cultural controls will eliminate problems with EHS. However, they will help reduce problems with scales and reduce EHS rebound after treatment.

When transplants are interplanted among older, scale infested trees, the scale will quickly move into younger trees. It is also harder to manage scales in uneven aged stands. By not interplanting, infested, problem trees are isolated from uninfested trees.

Reduce the Use of Nitrogen 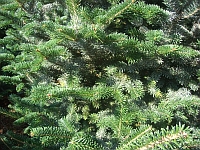 Pests often become more of a problem if the host plant receives excessive nitrogen fertilizer. That nutrition translates into nutrition for the pest, allowing it to reproduce better and live longer. In Fraser fir Christmas trees, there appears to be a connection between EHS and nitrogen fertilizer especially. In fields with a strong clover component in the ground cover, factor in the nitrogen being provided naturally and consider reducing nitrogen use in younger trees. 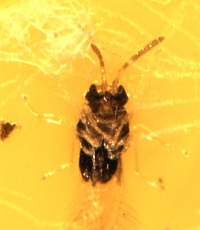 The EHS has many natural controls including lady beetles, dusty wings, and parasitic wasps. The use of broad spectrum insecticides such as Dimethoate and the synthetic pyrethroids (Asana, Astro, Sniper, Talstar, Wisdom) will kill these whenever applied during the growing season (April through October). Even though these products help control scale, their use can also allow EHS to rebound because the natural controls have also been killed out. Therefore, it is important to only use these broad spectrum materials when they are needed to control pests and to apply them with thorough coverage to get the best control possible.

Aphid control requires the most use of insecticides in Fraser fir. Products such as Sivanto, Neem oil and Endeavor which have much less effect on natural controls should be considered in fields with heavy incidence of EHS. Sivanto in particular has proven effective against twig aphids when applied in the spring and Cinara aphids in the fall. 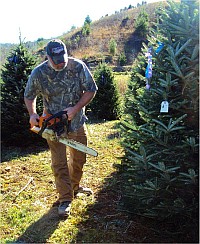 Even the best controls will only kill about 95% of the scales. That means on heavily infested trees where there are 10 or more scales per needle and the majority of the needles are infested, there will still be enough live scales to perpetuate a problem. By cutting down and removing the most heavily infested trees, you will be removing a significant source of reinfestation.

Cryptomeria scale especially produces a lot of crawlers in June and again in August. Crews that are shearing or tagging or otherwise walking through trees can carry crawlers to uninfested fields later that same day. Be sure to limit access of worker movement during times of peak crawler activity in Cryptomeria infested fields.

When Chemical Control is Necessary

When Cryptomeria scale is found in trees, prompt chemical control is warranted. Treatments are often quite successful, but scales may come back in 1-2 years. Be sure to keep scouting the newest growth to determine if reinfestation is occurring.

Judging if EHS is bad enough to control is a more difficult decision. It is impossible to completely eliminate EHS from a field once trees are infested. In some cases, EHS has been present in fields at low levels for several years without getting worse. However, it is also easier and more effective to treat for scale in younger trees. The goal is to have only low levels of EHS in trees at harvest.

To date, the best controls of EHS are either Talus, Safari, or a combination of either Sniper + Dimethoate or Asana + Dimethoate. Understand that even with the best treatments, 100% control of scale is not possible. The various windows for EHS are discussed along with the other pests that can be controlled with each product(s).

In younger trees, trunk applications with Safari for EHS control may reduce scale incidence without affecting natural control and pollinators. However, control of other pests of Fraser fir will still be necessary.

This is the most effective time for treating scales because the most nymphs are present for both EHS and Cryptomeria scale. However, controls during this time will also have the most impact on natural controls. If you have RBM though, this is definitely the time-frame you should be looking at.

Treating in the summer also gives good control of EHS. Deciding when in this treatment window to treat is difficult. Scale control is better earlier in the summer. The longer treatment is delayed into fall, the more likely scale control will be compromised because there are fewer immature scales. However, there are several good reasons for waiting. First of all, it’s usually cooler and easier to spray. Secondly, Cinara aphid control on trees going to market will be better and BTA control for the following spring will be better.

Spring Prior to Bud Break

Prior to bud break may not result in as good scale control except for trunk applications with Safari. However, if twig aphid control is needed, it can provide a window of opportunity for some scale control which may be sufficient depending on results.