Find this article at:
go.ncsu.edu/readext?690562
— Written By Jeff Owen

I am writing this on May 12, 2020. It is the fourth morning in a row with frost at my house. Regionally, temperatures dipped into the low 30’s Saturday and Sunday nights with some weather stations including Newland and Warrensville recording lows of 27 and 28 degrees. There appears to have been quite a lot of variation depending on the weather station and location. On farms there could be even greater variation as freeze injury maps out a pattern of coldest temperatures.

As we watch the forecasts, we tend to watch for the freezing point – 32 degrees Fahrenheit. Under the right conditions, even some low’s in the upper 30’s could lead to localized freezing conditions. Radiant cooling on a clear, still night can lead to pockets of settling air in the mid to high twenties – cold enough to injure new growth on trees. Forecasted low’s represent an average and fail to represent all locations particularly in the mountains. Colder temperatures and windy conditions associated with an Arctic blast or cold front would spell more widespread freeze damage on slopes and exposed locations – not just low-lying frost pockets.

Tracy Taylor, superintendent at the Upper Mountain Research Station in Ashe County provided me with the first report of frost injury on conifers observed on May 11. Lowest recorded temperatures at UMRS were 27 degrees taken early Sunday morning under still or very light wind. Tracy observed more damage on exotic firs like Turkish or Trojan than on later breaking Fraser firs. However, he found damage in every field he looked at, high or low. Conditions were right for radient cooling and settling pockets of air but they represented lakes of cold air rather than ponds. 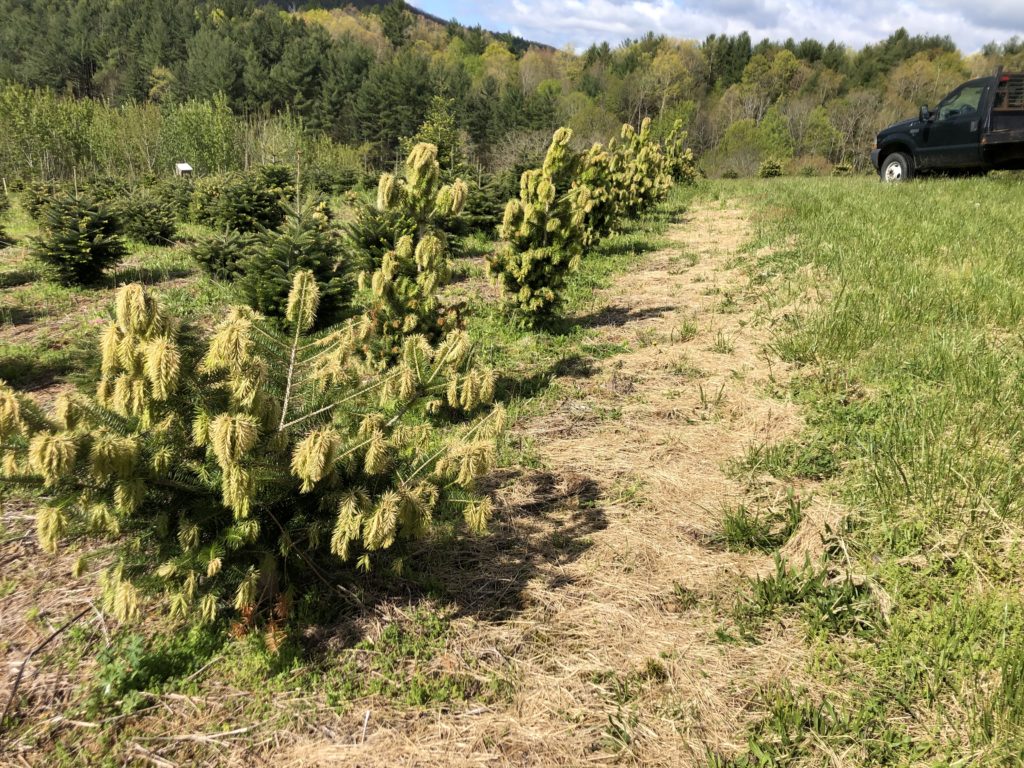 I also talked to Buddy Deal with Smokey Holler Christmas Trees this morning as he assessed damage in a field of ornamental conifers and Christmas trees. While not completely free of injury, the Fraser firs and white pines appeared to fare better than the spruces and exotic firs which were further along the process of shoot elongation. In that field, Concolor fir exhibited the worst damage. Arborvitaes were not showing any obvious damage yet.

“Yet” could be the operative word with frost or freeze injury this soon after the event. It can take time for the injury to progress to observable death of the tissue. Symptom progression depends on conditions that desiccate or dry out tissue. Wind, sun, and higher temperatures will speed the process.

Buddy categorized tree injury using a 5 point damage scale with “1” representing no injury and “5” representing catastrophic injury. The Frasers averaged “1.2” on May 12. Using a simple damage scale was a good way to understand variable and confusing symptoms. 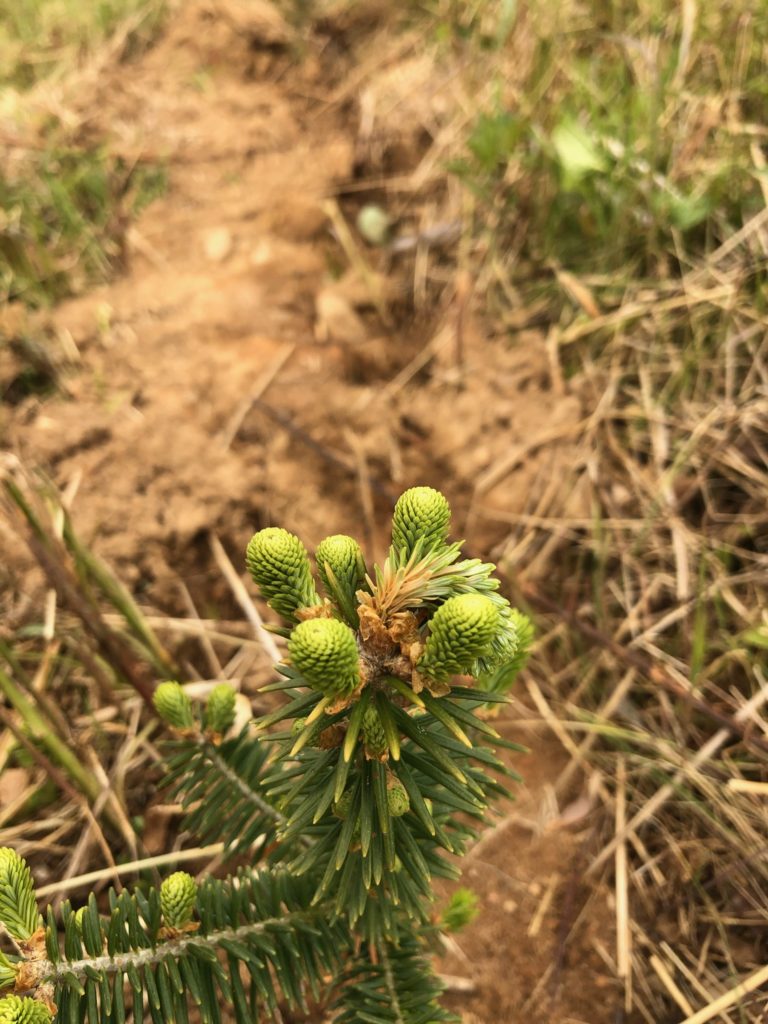 As I get additional reports and get out to see fields myself, I expect differences from farm to farm. Trees were at different stages of bud development or bud break when cold temperatures hit. Restriction of air flow and exposure varies field to field. Hopefully, it won’t be as bad as the 2002 freeze that was so far reaching. Radient cooling freezes will seldom be as wide spread as the results of a frontal system.

Formation of ice crystals in plant cells during a freeze kills them. In perennial plants, this is offset by the processes of cold acclimation and dormancy. In part, dormant plant tissues contain less water and more concentrated sugars and salts than actively growing tissues. This forms a natural “anti-freeze” to protect cells. Dormant buds are most resistant to freeze injury. Actively growing shoots have the least protection and will often wilt and die within a day or two of a freeze event. Expanding buds and emerging shoots are somewhere in between in their susceptibility to freezing temperatures. Damage will differ depending on the date freeze injury occurs. Further, different tissues can be more or less susceptible to injury.

Often with a May freeze, seemingly odd patterns of injury are observed. The bottoms or a single side of trees may be injured. Injured lower branches may reflect the depth of freezing temperatures in a frost pocket. Side injury can reflect the prevailing wind direction of the cold front or might point east toward the rising sun. Sunlight will dry out fully-exposed injured foliage more quickly than shaded foliage. The maturity of buds or shoots can also differ within a tree and reflect their own pattern of injury. Dominant buds or buds on the south side of a tree maybe slightly more active (less dormant) than other locations on a tree and be at greater risk.

A hard freeze in mid to late April can kill buds. Bud abortion is often associated with the center crown bud that makes the new leader and / or the lateral buds in the crown. Patterns can also include lateral buds along tree leaders, particularly the side facing the prevailing wind direction during a freeze event. Loss of any of these key buds can set a tree back for a year or more and be difficult to correct through pruning and shearing.

April freezes can also injure bud scales but not the tiny shoot inside the bud. Injured or dead bud scales become resin-soaked and stiff. Several weeks later when new shoots are trying to emerge, their growth is restricted by bud scales that cannot expand. Stunted yellow shoots with short or backward-bending needles are often the result. This freeze injury pattern is usually associated with leaders and lateral shoots that emerge from the crown bud (the same buds that aborted from freeze injury on neighboring trees), or terminal shoots on branches. These dominant buds may be swelling before other buds on a tree with a corresponding loss of dormancy-protection. One characteristic of this injury will be the presence of hard dry bud scales at the base of injured shoots long after the bud scales have fallen off of normal shoots. Degree of constriction will determine if the shoots eventually recover or are bypassed by healthier foliage on the tree.

Hopefully, only a handful of Fraser fir Christmas trees are injured on your farm. Determining the best treatment can be difficult. Growers often err on the side of too much intervention or one-sided intervention. Even after injury from a freeze or hail storm, plant growth regulator-based shearing principles still apply.

A conical-shaped Christmas tree depends on a proper balance of plant growth regulators. The loss of dominant buds can throw a tree into biochemical chaos. Dominance of what are now the apical shoots must be sorted out within the tree. Aggressive pruning can undermine the healing process the tree undergoes. Hormonal dominance will determine which shoots become leaders. It will be more apparent as foliage matures. It may be better to wait until normal July shearing season and work with what the tree provides rather than trying to “jump the gun” in late May or June.

When that time comes, if the leader was killed, try to select the highest and best surviving shoot. Even a slight height advantage over its neighbors can boost bud or shoot dominance. Leaders should be twice as long as lateral branches to maintain hormonal dominance to the following year. Lateral branches should never be so short that they have only one or two buds left (those will become multiple tops or “horns” next year). If only the base of a lateral shoot remains, consider removing it completely. The absolute worst shearing practice is to cut back hard on the central leader without also trimming lateral branches immediately below it. If you cut the leader, laterals also need to be cut (and hormonally suppressed).

Remember, less intervention is often better. If a tree is severely damaged, you can wait until next year to correctively prune. It may take more work but you might not lose more than one year overall. Salvage shear this year, and there won’t be any growth to fix next year. Hard shearing into old growth can cost you 3 years in the end.

Finally, freeze-injured shoots do not fall off on their own. They dry and become resin-soaked. You will either need to prune or sweep-off dead shoots from market trees. Some customers might not care, but most will. After the 2002 freeze, growers found that dried shoots swept off more easily during dry weather when humidity was low and shoots were most brittle.

Spring freezes are among the worst problems that Christmas tree growers face. One can hope that bad ones happen only once a generation. This is one point in time when genetic diversity and tree species differences really stand out. A beautiful fast growing tree may not be so desirable if it is prone to repeated frost injury. Sometimes that slower-growing, late-breaking selection might be the best choice.